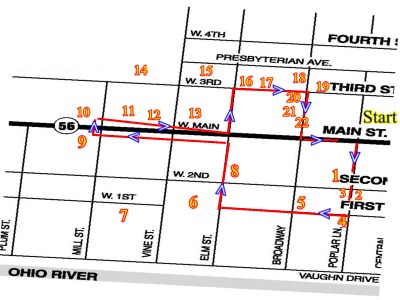 Madison, on the banks of the Ohio River, became the gateway to the Northwest Territory with the building of the famous “Michigan Road” and, later, the first railroad west of the Allegheny Mountains (Madison to Indianapolis). It was selected as the “Typical American Town” by the Office of War Information during World War II. A movie was widely distributed by OWl heralding the community. It was the setting for the movie “Some Came Running” in 1958. Nowhere else in the Midwest is it possible to find comparable architecture. Within a few blocks can be found houses showing direct descent from Bulfinch and Latrobe, splendid examples of the Federal Style, the Classic Revival as sponsored by Jefferson, and the Americanized Italian Villa style which became popular in the reign of Victoria. For much of its fine architecture, Madison is indebted to Francis Costigan who came to the bustling, growing town in 1837 from Baltimore. He had trained under the influence of Benjamin Henry Latrobe who, up to that time, was America’s most highly educated architect and the man who established the Greek Revival in this country.This tour was prepared by Brooklyn Cull and is the property of Historic Madison, Inc. and used by permission. 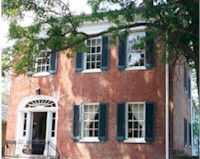 I. Walk one block south on Poplar to the Jeremiah Sullivan House, 304 W. Second, built 1818, a fine example of the federal style and considered Madison’s first mansion. Unchanged architecturally, it exhibits the excellent taste of its builder in the fine details in the street door and throughout the house. The basement kitchen with brick floor and stone fireplace is furnished in period. On the first floor is the only restored Federal serving kitchen on record in the country. The third floor contains the Sullivan family schoolroom. In the rear yard is a reconstructed bakehouse and smokehouse. Sullivan and others named Indianapolis as a state legislator and formulated decisions while on the bench of the Indiana Supreme Court still in use in today’s courts. His son, Thomas, was an early mayor of Indianapolis and his great-grandson, Reginald, had the distinction of having been twice mayor of that city. There is a nominal admission charge. This property is owned by Historic Madison, Inc.

2. Cross Second Street and Poplar Lane to the Schofield House at217 W. Second, probably built in 1817 and Madison’s first two-story brick house. A fine example of Federal style with unusual lunettes over the front windows. The Grand Masonic Lodge of Indiana was organized January 12, 1818, here. In the 1970s the Lodge purchased the building and completed its restoration. Open to the public. 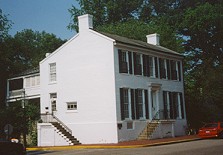 3. The Talbot-Hyatt House at 301 West Second Street is another fine example of the Federal style of architecture. Richard C. Talbot came to Madison from Pennsylvania probably in 1814 or 1815 and acquired this land site on May 5, 1819. He was a local public servant and served his country in the War of 1812 and the Mexican War. He died in the latter war and was brought home from New Orleans on a steamboat. When the first log courthouse burned, Talbot’s home was authorized to be used as the office of the County Clerk. Today the house is owned by Historic Madison, Inc. Immediately west of the house are the Pioneer Garden and the Carriage House, additions made during the late 1960s and during the 1970s. Open to the public from dawn to dusk. 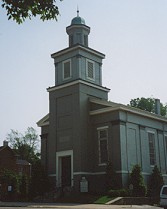 5. Go west from Shrewsbury House on the south side of First Street. Note the Presbyterian Church, built in 1846, with the Christopher Wren style bell tower. One of Madison’s better remembered private schools serving children of today’s primary school age was conducted by Miss Martha McClure in the church basement during the 1850s and 1860s. 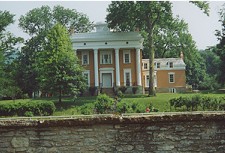 6. Continue west on First Street to the James F. D. Lanier Memorial, 500 West First Street. The Lanier home is owned by the State of Indiana; no admission charge. Built by the architect, Francis Costigan, 1840-1844, this stately porticoed mansion is a splendid example of the Classic Revival style of architecture and it is reminiscent of the cultured, leisurely and prosperous eighteen-forties. The fine wrought and cast iron on this and other Costigan houses were designed by him and fabricated at Madison foundries. When Uncoln called for six regiments from Indiana in the Civil War, it was Lanier who advanced nearly half a million dollars to equip them. Other loans to Indiana, all on the note of Governor Morton, are said to have been significant in determining the eventual outcome of the war. While at the Lanier Mansion don’t miss the 1850’s cutting and vegetable garden.

7. From the garden of the Lanier home, look west beyond the Boys’ Club to the octagonal building on First Street. This was the third passenger station of the Pennsylvania Railroad. The second station was just over the knoll to the south on the river bank; swept away in the 1937 flood. The depot and the new Historical Museum are owned by the Jefferson County Historical Society. Both are open to the public.

8. Go north on Elm one block to the Colonial Inn (Colby House) on the northeast comer of Second and Elm.Tradition has it that the house was built with a loan made to a newcomer on the basis of unseen contents of a large trunk deposited with Lanier’s bank. The bank discovered the truth after the borrower’s lengthy absence–the contents were worthless. Lanier and his family occupied the house while the Lanier home was being completed. It was operated as an inn for many years until about 1920 but is now a private residence.

9. Go north one block, then west on Main to the Trolley Barn, the site of a city market in the late 19th Century and the home of the Madison Power and Electric Company prior to its interior renovation when a number of shops were established in the 1970s. Immediately west is Margie’s Country Store, an example of exterior preservation through an agreement between Historic Madison, Inc. and private business. 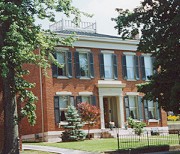 10. Directly across Main Street (No.718) is the Holstein. Whitsitt House, Greek Revival, 1840. Costigan may have been the architect. This house shows the influence of the East Coast, particularly of the houses in Salem, Portsmouth, and Kennebunk designed by Bulfinch and McIntyre. 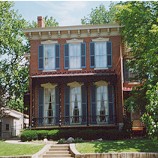 11. Go east on Main Street. Note the iron lace on the front of the house at No.620 Main–Italian Villa architectural style. 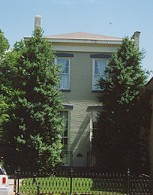 12. Continuing east on Main. note the house at No.610. It was the home, during the Civil War of Mrs. Helm, a half-sister of Mrs. Abraham Lincoln. Her husband, a Confederate officer, was killed at Chickamauga. The widow left her home in Lexington. Ky. on account of hostile war feelings at the time. After she came to Madison she played the organ in the Episcopal Church. On her first entrance into the church she is said to have been handed a hymn book with her name in it: It proved to be the very hymnal she had packed in Lexington. It had turned up in Madison in confiscated luggage.

14. Continue north to John Paul Park located north and west of the Third and Vine intersection. Named in honor of Madison’s founder this area was at one time the West Third Street Cemetery. 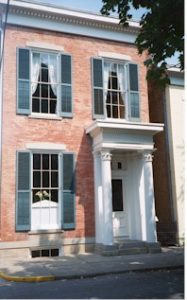 15. Go east on Third Street to 408. The home of Madison’s famous architect, Francis Costigan, was built in 1849 on a 22-foot wide lot and reflects the skill and ingenuity of the man. Within are interesting double stairs with a now-famous push gate at the top. Note the sliding front door. This property is owned by Historic Madison, Inc. Open to the public.

17. The house at 310 West Third was built in 1837 and has survived almost without alteration.

18. The houses on the west side of Broadway and north of Third include excellent examples of Madison’s early architecture–the one at 509 built about 1837. 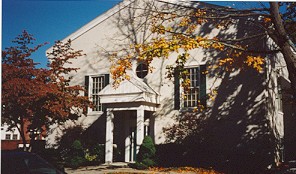 19. One-half block east of Broadway, at 210 West Third, is the original Roberts Chapel, now occupied by Sherman, Barber & Mullikin, Accountants. Named for an early Methodist, Bishop Roberts, it was used as a place of worship by Methodist until 1851 when it was sold to St. Patrick’s Benevolent Society.

20. At 419 Broadway is the house built by Mrs. John Paul, wife of Madison’s founder, in 1837. It is a good example of Baltimore style. Edward Eggleston, the author, lived here, around the turn of the century.

21. Note the architecture of the buildings as you move south toward Main Street Trinity Methodist Church, erected in 1873, shows Norman-Gothic style as influenced by English taste.

22. The fountain, originally cast iron, was presented, in 1876, to the Philadelphia Centennial Exposition by the Republic of France. It was then purchased by the Indiana Order of Odd Fellows and presented to Madison. It was returned to its original condition–but recast in bronze– during the latter 1970s and re-dedicated in the summer of 1980.23. Note the old iron storefronts at 323-327 West Main. These are good examples of the Italianate style which flourished in steamboat days and which now give Madison–much of its character. The heavy cornices at the roof line and the ornate window caps derive from that style, introduced in the early 1850s. Madison’s Main Street exhibits many fine examples.

24. Go east on the north side of Main. Note the iron balcony on the second floor of the old brick building at 306 West Main, especially the unusual pattern in the ironwork. Date: about 1850