With the building of the famous “Michigan Road” and, later, the first railroad west of the Allegheny Mountains (from Madison to Indianapolis), Madison became the gateway to the Northwest Territory. Nowhere else in the Middle West is it possible to find comparable architecture. Within a few blocks can be found houses which show direct descent from Bulfinch and Latrobe models, splendid examples of the Federal style, the Classic Revival, and the Americanized Italian Villa style popular during the reign of Victoria. For much of its fine architecture, Madison is indebted to Francis Costigan who came here from Baltimore in 1837. He was influenced by Benjamin Henry Latrobe who established the Greek Revival in this county.
This tour was prepared by Brooklyn Cull and is the property of Historic Madison, Inc. and used by permission.

Special thanks to Natalie Bear for some great photos

START YOUR TOUR AT THE CITY PARKING LOT, SOUTHEAST CORNER OF JEFFERSON AND SECOND STREETS. It will take approximately two hours and will cover sixteen short city blocks. Walk north on Jefferson observing very early store buildings on both sides of the street Note the English Archer Tower atop the Knights of Pythias Building at 314 Jefferson.

1. The Jefferson County Court House, designed by architect David Dubach, is a fine example of Classic Revival. It was erected in 1854-55, at a cost of $36,000, after an earlier building burned in 1853. The exterior architecture was not altered when the interior was modernized in 1960. Before turning east on Main Street, look west and observe the fine upper portions of the stores, especially the large four-story building in the middle of the block on the north side of Main (Masonic Building). Fine Mansard roof and ornate window caps are features. Others on both sides of the street have the same characteristics

2. Turn east on Main Street to the jail in the middle of the block. The Old Jail is that portion of the building closest to the Court House with pediment and main entrance facing Main Street. It has been kept intact with its heavy iron doors, heavy chains and very large locks on dungeon-like cells. A tour of the Old Jail and the Court House can be made by appointment. Continue east on Main. Just east of the jail is the Middleton Monument, dedicated to men of the Civil War. Note at this time (2A), the three-story Italianate building on the north side of Main which has survived without change. The upper floors of this building, 325 E. Main, were originally used for large public gatherings.

3. In steamboat days the space east of the jail and facing Walnut Street was the location of the old covered market. Farmers brought their produce here and then spent the night in the hotel directly across the street (4), the large brick building on the southeast corner.

5. Cross Main Street to the north side of the street and note the Madison Volunteer “Fair Play” Fire House Company No.1, founded in 1841. The building was erected in the 1880s in the style of the Italian towers of the Renaissance. See the hand-drawn fire engine on display in the firehouse, acquired about 1850, and “Little Jimmy” atop the building.

6. Continue east on the north side of Main to St. Michael’s Avenue, then north on that street to St. Michael’s Catholic Church, erected 1838-1839. Tradition says that Costigan completed the designs for this building as his first task after his arrival in Madison. Note the Be11 Tower at the rear and the “open book” or double-curved ceiling. Stone for the structure came from the second cut on the railroad being constructed at the time. Open by appointment.

7. Be sure to notice the house at the rear, near the bell tower. It is a fine adaptation of the garden houses designed by Vignola for the Popes at Villa Lante north of Rome in the sixteenth century. 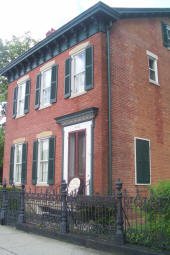 8. Continue west on Third Street to Jefferson, noting the old brick buildings on each side of Third. Observe the house at the southeast comer of Jefferson and Third Streets with the Italianate cornices (8A).

9. Turn north on Jefferson one-half block to the house with columns, no.521, on the west side of the street. Basically Federal, this house has modern columns in the tradition of the Classic Revival and ironwork of the Romantic Era. The two-story portion at the rear was added sometime in the 1850-1860s. Continue north to Fourth Street, then west on Fourth Street to Mulberry.

10. Turn south {left) on Mulberry one-half block to Christ Episcopal Church, 1847-1848. This fine example of English Gothic is said to be the earliest relatively pure example of this style in the Northwest Territory. Of interest are the heavy roof timbers, held in place with wooden pins, the hand-made locks and bricks, and the carillon. Open by appointment.

11. Continue south on Mulberry to Third Street. Turn west {right) on Third Street to the middle of the block. This large, painted brick at 113 West Third was built about 1832. It served as a Radical Methodist Chapel, the high school, then as a Jewish Synagogue {1867-1869).

12,13,14. Continue west, noting three houses on the south side of the street: (12), the house at 108 was built in 1819 with the front portion added in 1850. Representative of homes built by early families coming to Madison before the Civil War from slave states; (13), the house at 106, had fine basement kitchen and wine cellar. Note doorstep benches. This is an excellent Federal example; (14), the one-story house at 104 is also a fine example and early enough to show general proportions of the preceding Georgian style.

15. On the northeast corner of Third and West is The John T. Windle Memorial Auditorium. Designed by architect Edwin J. Peck and built in 1835 as the Second Presbyterian Church, this fine example of the Greek Revival style is said to be the oldest public building in Madison and the finest example of this style in the Northwest Territory. It is now the headquarters of Historic Madison, Inc. It contains a public auditorium and meeting room for community use and a restored 1867 Johnson Tracker Organ, opus 217. 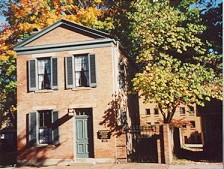 16. Dr. William Hutchings Memorial. This office and private hospital of a mid-nineteenth century horse-and-buggy doctor were presented to Historic Madison, Inc. The donors have made possible the full restoration of this four-room building which is classic in style and contains most of the doctor’s original equipment and furnishings. This restoration is one of the few in this country that show all original furnishings.

17. Return to West Street and continue south to 416 West Street. Here is the site of the first Masonic Temple built of logs and dedicated in 1822 by the then Grand Master of Most Worshipful Grand Lodge of Free and Accepted Masons, Honorable John Sheets. This log structure had the only room big enough to accommodate a large gathering. The Presbyterians rented it for two dollars a month, and Father Shaw of the Roman Catholic Church held the first local Catholic christening ceremony here.

18. Continue south one-half block to Main. Notice the fine storefronts with fluted iron columns on the south side of the street These date from the 1850s when Madison had its own iron foundries. 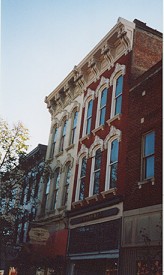 19. Before turning east on Main Street. notice the storefront three doors west of West Street. The fine, thin Tuscan columns of cast iron were made in Madison and are characteristic of the Italianate style of the 1850s. Note other storefronts on both sides of Main. 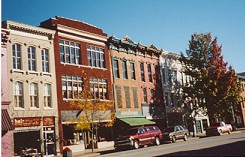 20. Turn east on Main to Mulberry Street, noting the upper portions of the storefronts on both sides of Main. The heavy cornices and well-designed window caps were made to resemble carved stone and date from the 1850s, showing the influence of the Italian Villa style of architecture popular in this country at that time.

21. Turn south on Mulberry, walking on the east side of the street to get the best view of storefronts on the west side. This is the center of Old Madison, and this was the street used by passenger traffic from the wharf boat on the river to the center of the town. Many of the buildings in this block date from the 1830s and have fortunately survived almost without change, making this block one of the most perfect period pieces to be found today. Merchants lived on the second and third floors above the stores. Examples of Federal style dominate. 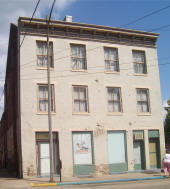 22. The building at 316 Mulberry housed Hentz’ Bakery until January 1981. It had been a bakery continuously for a longer period than any other in Indiana, about 140 years. The exterior shows almost no change.

23. On the comer of Mulberry and Second, this building, formerly Central Hotel, was used in the film, “Some Came Running,” 1958. The exterior has fine Italianate window caps and cornices. 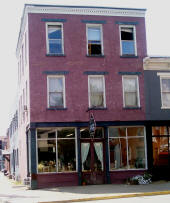 24. Go east on Second Street one block to point of beginning, City Parking Lot. Look at the building on the northwest comer or the intersection of Second and Jefferson. The third floor of this building was a public dance hall, heated by a fireplace. Orchestras in packet boat days were small and the orchestra balcony hung over the stairway.

25. Before leaving the parking area, look south on Jefferson Street one-half block and note the location of the Post Office. This building occupies the site of the home of John Paul, said to have been the first home built in the area of Madison. Paul laid out much of the valley portion of the city.